In 2000 Action on Pre-eclampsia was responsible for bringing together top experts in pre-eclampsia, to develop the first ever national guidelines for midwives on the detection of the disease and how to assess women who were at risk.

This included representatives from the Royal College of Obstetricians and Gynaecologists and the National Institute for Clinical Excellence.

PRECOG was a five year, several stage, project with a budget of £300,000 sponsored by GlaxoSmithKline. The project involved an initial audit of all Maternity Day Assessment Units (DAUs) in the UK to assess current practice amongst midwives. This was accompanied by a review of current research and recommended best practice by the PRECOG expert group to inform the development of the guidelines. All DAUs were asked whether they would like to introduce the guideline and 80% said yes – this positive response yielded a nationwide cohort of PRECOG champions wishing to promote the guidelines in their area of work.

Following the production of PRECOG, APEC sent expert advisors (those who had worked on developing the guideline and were fully au fait with the research and reasoning which had supported their development) to aid local level implementation by those champions. A further audit of DAUs one year later showed a 50% implementation rate and a 90% awareness rate. The guidelines also received thousands of hits on international databases. 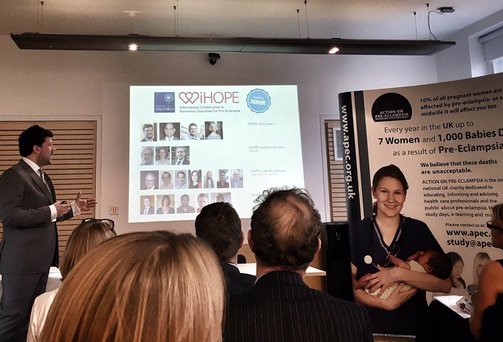 Our study days are widely recognised as being excellent, with speakers who are leaders in the field of pre-eclampsia.